At the beginning of the twentieth century, the South Pole was the most coveted prize in the fiercely nationalistic modern age of exploration. In the brilliant dual biography, the award-winning writer Roland Huntford re-examines every detail of the great race to the South Pole between Britain's Robert Scott and Norway's Roald Amundsen. Scott, who dies along with four of his men only eleven miles from his next cache of supplies, became Britain's beloved failure, while Amundsen, who not only beat Scott to the Pole but returned alive, was largely forgotten. This account of their race is a gripping, highly readable history that captures the driving ambitions of the era and the complex, often deeply flawed men who were charged with carrying them out. THE LAST PLACE ON EARTH is the first of Huntford's masterly trilogy of polar biographies. It is also the only work on the subject in the English language based on the original Norwegian sources, to which Huntford returned to revise and update this edition.

An excerpt from The Last Place on Earth


What most people know of the conquest of the South Pole is that Captain Scott got there and then died heroically on the return journey; that when the Polar party lay tent-bound and apparently doomed, Captain Oates unselfishly said, "I am just going outside and may be some time," and took himself out to die, so that his comrades might live; that Scott represented self-sacrifice and endurance, and glorious failure, the personification of the British ideal of plucky defeat. Scott's expedition was essentially scientific; he was beset by bad weather. Roald Amundsen is a sort of afterthought: Oh, yes, the dour Norwegian actually got to the Pole and planted his flag first, but that's a detail; he was very lucky and a little devious. So much for the Pole.
Mr. Huntford proves all of this wrong, and much more, to boot. Thus, the kerfuffle.

It is a measure of the power of this book that when it first appeared in Britain, it caused an uproar; and a few years later, a television series that was adapted from it created a flurry of angry letters to newspapers and a great deal of public discussion in which the book was rubbished and its author condemned--even vilified in some quarters for suggesting that Fridtjof Nansen was engaged in a sexual affair with Kathleen Scott while her husband lay freezing in his tent. But what had Mr. Huntford actually done? He had written a riveting account of two expeditions intending simultaneously to achieve the South Pole. His book is well documented, soberly and sometimes wryly written, much of it is thrilling, some of it as dramatic as exploration can possibly be, and to my mind few things are more dramatic.

But the Polar quest was not just exploration, a journey of discovery. It was indeed (although Scott tried to deny it) an unambiguous race to be the first at the South Pole. National pride was at stake--Norwegian and British; two different philosophies of travel and discovery--skis versus trudging, dogs versus ponies, canvas and rubberized cloth versus fur anoraks and Eskimo boots; two cultures--Norse equality ("a little republic" of explorers) versus the severe British class system; and two sorts of leadership, more particularly, two different and distinct personalities--Roald Amundsen's versus Captain Scott's.

The great surprise in the book is that Amundsen is not a moody, sullen Scandinavian, but rather a shrewd, passionate, approachable, thoroughly rational man, who tended to understate his exploits, while Scott--quite the reverse of the British stereotype--was depressive, unfathomable, aloof, self-pitying, and prone to exaggerate his vicissitudes. Their personalities determined the mood of each expedition: Amundsen's was spirited and cohesive, Scott's was confused and demoralized. Amundsen was charismatic and focused on his objective; Scott was insecure, dark, panicky, humorless, an enigma to his men, unprepared, and a bungler, but in the spirit of a large-scale bungler, always self-dramatizing.

Mr. Huntford's judgments are unsparing: "It was Scott who suited the sermons. . . . He was a suitable hero for a nation in decline." Amundsen had made the conquest of the Pole "into something between an art and a sport. Scott had turned Polar exploration into an affair of heroism for heroism's sake." Mrs. Oates, who was privy to a running commentary on the Scott expedition through her son's letters home--Oates was throughout a remarkable witness--called Scott the "murderer" of her son. As for Oates' opinion, "I dislike Scott intensely," he wrote in Antarctica.

Far from being a belittler or having an ax to grind about the phlegmatic British (for he has written elsewhere with justified admiration of Shackleton), Mr. Huntford merely points out that Britain took Scott as a necessary hero; it is not the British character that is being assailed in this book. Mr. Huntford demonstrates that, all along, Scott was the problem. Though he knew little of actual command (and was unsuited to it), Scott was ambitious, seeking advancement, even glory, in the Royal Navy. He was a manipulator, and he knew how to find patrons, which he did in Sir Clements Markham, a wonderful sly subsidiary character in the narrative--vindictive, pompous, queenly, attracted to Scott more for Scott's being strangely epicene. This femininity in Scott's personality was remarked upon by one of Scott's own men, Apsley Cherry-Garrard--the youngest in the expedition--in his masterpiece of Polar exploration, The Worst Journey in the World. Cherry-Garrard also mentioned how Amundsen had been underrated as "a blunt Norwegian sailor" rather than "an explorer of the markedly intellectual type," sagacious and weather-wise. And Scott, Cherry-Garrard wrote, was easily reduced to tears.

The weather has always been regarded as the determining factor in Amundsen's success and Scott's failure. Yet it offered little advantage: Conditions were pretty much the same for both expeditions. The fact was that Amundsen was far better prepared, and Scott left no margin of safety for food, fuel, or weather. In a journey of four months Scott had not allowed for four days' bad weather. Parallel diary entries in a given period show Amundsen hearty and bucked up as he skis through fog, and just behind him Scott's diary shows him fatigued, depressed, complaining, slogging along. Mr. Huntford sees this not as a difference in style but in approach:

Scott . . . expected the elements to be ordered for his benefit, and was resentful each time he found they were not. This was a manifestation of the spiritual pride that was Scott's fatal flaw.

The difference between the two rivals is expressed in the way each called on the Deity. Scott did so only to complain when things went wrong; Amundsen, to give thanks for good fortune. In any case, Scott was an agnostic and believed in science; Amundsen was a Nature-worshipper. For that reason alone, Amundsen found it easier to accept the caprice of blizzard and storm. He and his companions were in tune with their surroundings; they were spared the angst that tormented Scott and, through him, pervaded the British expedition.
The Norwegian expedition, though vastly underfunded, were all of them skiers, had a better diet, simpler but more sensible gear, and the bond of friendship. Skis were a mere novelty to the non-skier Scott, whose class-ridden expedition had plenty of money and patrons. He had planned to depend upon ponies and motorized sledges, but when these proved useless he was forced to haul sledges by hand. In the base camp, long before Scott's party set out for the Pole, one of Scott's men--significantly, it was the one Norwegian, Tryggve Gran--wrote, "Our party is divided, and we are like an army that is defeated, disappointed and inconsolable."

Amundsen had heart and compassion but could also be an odd fish in his way. He had a prejudice against doctors. He wouldn't take one on an expedition. "He believed that a doctor," Mr. Huntford writes, "because of his priest-like rôle, meant divided command." On the other hand his men were master navigators. Only one of Scott's men could navigate and he was not taken on the Polar party, though at the last moment Scott decided to take an extra man, which meant that rations would inevitably be short.

The long shadow over this quest for the Pole was cast by the towering figure of Nansen who, Mr. Huntford wrote, was canoodling with Kathleen Scott, who was in her way just as formidable a person. The loan of Nansen's ship, the unsinkable, the uncrackable Fram, was an immense benefit to Amundsen; Scott's creaky Terra Nova was no match for it, and indeed the Fram ultimately had the distinction of sailing both farthest north and farthest south. The Fram was crucial,
for Amundsen needed a seaworthy and powerful purpose-built, expedition-tested ship. His mission was secret, he left home much later than Scott, and had almost no patronage. Yet in almost every instance, Amundsen makes the right, most astute judgment and Scott the wrong, most ill-informed one, which is why this book seems to me so valuable, for it is a book about myth-making and heroism and self-deception, the ingredients of nationalism.

This book was a sensation when it first appeared, and now rereading it twenty years later I still find it an engrossing and instructive narrative, with vivid characterization and a mass of useful detail. When you finish it you know much more about human nature, for it is more than a book about the South Pole. It is about two explorers, two cultures, and about the nature of exploration itself, which is to me a counterpart to the creative impulse, requiring mental toughness, imagination, courage, and a leap of faith. Most of all, this book about a race, which was the last great expedition that ended the Age of Discovery, is a study in leadership.

Paul Theroux's most recent book is Sir Vidia's Shadow. His new book of travel writings, Fresh-Air Fiend, will be published in the spring of 2000.

Roland Huntford is the former Scandinavian correspondent for the London Observer. He is the bestselling author of two critically acclaimed biographies of Ernest Shackleton and Fridtjof Nansen as well as the novel Sea of Darkness. He lives in Cambridge, England. 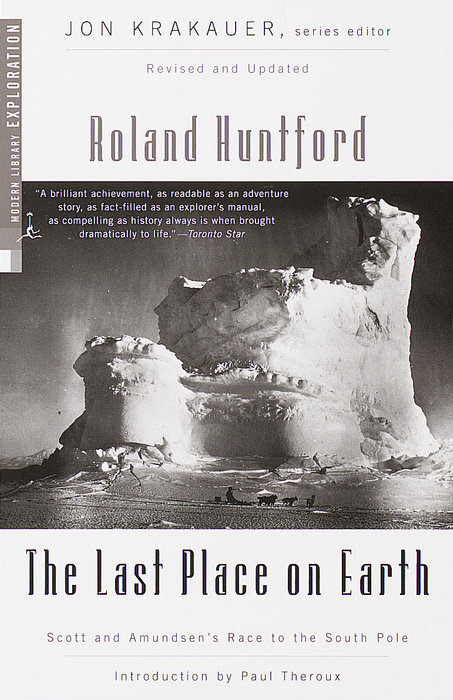