NEW YORK TIMES BESTSELLER • In this irresistible novel from the author of All We Ever Wanted and Something Borrowed, a young woman falls hard for an impossibly perfect man before he disappears without a trace. . . .

It’s 2 A.M. on a Saturday night in the spring of 2001, and twenty-eight-year-old Cecily Gardner sits alone in a dive bar in New York’s East Village, questioning her life. Feeling lonesome and homesick for the Midwest, she wonders if she’ll ever make it as a reporter in the big city—and whether she made a terrible mistake in breaking up with her longtime boyfriend, Matthew.

As Cecily reaches for the phone to call him, she hears a guy on the barstool next to her say, “Don’t do it—you’ll regret it.” Something tells her to listen, and over the next several hours—and shots of tequila—the two forge an unlikely connection. That should be it, they both decide the next morning, as Cecily reminds herself of the perils of a rebound relationship. Moreover, their timing couldn’t be worse—Grant is preparing to quit his job and move overseas. Yet despite all their obstacles, they can’t seem to say goodbye, and for the first time in her carefully constructed life, Cecily follows her heart instead of her head.

Then Grant disappears in the chaos of 9/11. Fearing the worst, Cecily spots his face on a missing-person poster, and realizes she is not the only one searching for him. Her investigative reporting instincts kick into action as she vows to discover the truth. But the questions pile up fast: How well did she really know Grant? Did he ever really love her? And is it possible to love a man who wasn’t who he seemed to be?

The Lies That Bind is a mesmerizing and emotionally resonant exploration of the never-ending search for love and truth—in our relationships, our careers, and deep within our own hearts.

An excerpt from The Lies That Bind

It is sometime between one and two in the morning, ­and I am sitting alone in a grungy, graffiti-covered dive bar in the East Village. The vibe is mellow, the crowd as eclectic as the jukebox—a blend of rock and metal, punk and hip-­hop. At the moment, Dido is crooning “Thank You,” the ballad I loved, then overplayed and tired of, which now just fills me with aching lonesomeness.

As I finish a pint of stout, I make eye contact with the bartender, a middle-­aged, gray-­haired man who is pleasant but not chatty. “Would you like another?” he asks with a hint of an Irish accent I didn’t notice before.

“Yes, please,” I say, then, against my better judgment, ask if they have a pay phone.

He tells me they do, but it’s out of service. I feel a wave of relief, until he hands me a cordless phone from behind the bar and says I’m welcome to use it if it’s not long distance. I stare down at the receiver, thinking that this is precisely why Scottie, my best friend since the first grade, told me to stay in and not drink. Batten down the hatches, he had coached me from our hometown of Pewaukee, Wisconsin, explaining that I wasn’t ready to be tested by a buzz.

I initially followed his advice, hunkering down on my secondhand slipcovered sofa to eat Thai takeout and watch the shows I’d been videotaping all week: Will & Grace and The West Wing, Frasier and Friends, Survivor and The Sopranos. Television, I’d discovered in the week since Matthew and I had broken up, had the numbing effect of alcohol without the obvious pitfalls, and it eventually lulled me to sleep, one step closer to the elusive promise of time healing all.

But sometime around midnight, after transferring from my sofa to my bed across my four-­hundred-­square-­foot studio apartment, I snapped wide awake to a disjointed but decidedly R-­rated dream featuring Matthew and Jennifer Aniston—or to be more precise, Rachel Green, who also happened to be cheating on Ross. Staring up at a water stain on my plaster ceiling, I told myself that it actually wouldn’t be cheating in our case—we were broken up, not “on a break”—but I still felt irrationally pissed, imagining Matthew with someone new, moving on before I could. Of course, the opposite could also be true. He could be staring up at his ceiling, missing me, too. Maybe he’d even caved and called me.

I reached for my cellphone on the nightstand, flipping it open, checking for a voicemail or even a missed call. Nothing. I got up, stumbled over to my desk, and stared into that damn red eye on my answering machine, taunting me with the reminder that I had No. New. Messages. The last step was to turn on my computer and check my AOL email and Instant Messenger—the portal where Matthew and I once communicated throughout our workday. Still nothing. That’s when the panic set in. Panic that I’d never be able to fall back asleep; panic that even if I did fall asleep, all that awaited me was a lonely Sunday morning; and most of all, panic that I would look back at this fork in the road as the biggest mistake of my life. That Matthew would become my One Who Got Away. The one I pushed away simply because I had no guarantee of a future with him.

Like an alcoholic holding a bottle of vodka, I ran my fingers over the keyboard, craving the familiar, asking myself what it would ­really hurt to say hello. I told myself not to do it. Not only because of pride, but because I didn’t want to go backward. The first week was surely the hardest. It had to get easier. I had to be strong. And that’s when I made the split-­second decision to leave my apartment, get some fresh air, move away from my electronic instruments of self-­destruction.

Within seconds, I was brushing my teeth, running a comb through my hair, and stripping off my T-­shirt and ancient plaid flannel pajama pants. I rifled through my open hamper, pulling on a baby-­doll dress and a black cardigan. Both pieces were wrinkled and smelled faintly of the greasy diner on Lexington Avenue where I’d eaten earlier that day, but I put them on anyway, figuring there was no point in wearing anything nice—or even clean—for a late-­night stroll. Strategically leaving my cellphone behind, I grabbed my purse, threw on my Steve Madden platform slides, then headed out the door, locking up with keys attached to my University of Wisconsin nylon Velcro wallet, a vestige from grad school that Matthew once told me was “cute” and “so you”—which I now saw as a backhanded compliment. A you’re-­not-­quite-­good-­enough-­to-­marry kind of comment.

I walked down the narrow gray corridor, past neighbors I would never know, bypassing the claustrophobic elevator that I took only when carrying groceries—and almost never without imagining being trapped inside and slowly suffocating. The thwaps of my footsteps echoed as I descended four flights of the concrete stairwell to a doorman-less lobby so hideous that it should have been a deal breaker when I was apartment hunting. Three of the walls were covered in a trippy orange wallpaper; the fourth was smoke-­mirrored—and not in a cool deco way, but in a depressing, dated way. I caught a glimpse of myself, the word frumpy coming to mind, a tough feat at age twenty­eight. But I looked on the bright side: My current appearance would serve as an insurance policy against “running into” Matthew—say, at the doorstep of his apartment.

Then I was outside, in the no-­man’s-­land between Gramercy and the East Village. As I inhaled the warm night air, I felt the slightest bit better, almost hopeful. After all, this was New York, the city that never sleeps. The possibilities were endless, and summer was coming. It was the feeling I’d had when I moved to the city four years ago—before I’d become jaded. How was it possible to be jaded in your twenties?

I headed east, in the opposite direction from Matthew’s Upper West Side apartment, but with no destination in mind. I considered stopping by the bodega on Second Avenue, which has the best selection of candy and magazines, but kept going, past Stuyvesant Square, then onto Fourteenth Street. Along some of the sketchier blocks, I contemplated digging into my purse for my pepper spray, but there were too many people out and about for me to really worry. It was a concept my parents didn’t grasp, their view of New York rooted in the seventies, back when the city apparently turned into a gauntlet of criminals after nightfall.

When I reached Avenue B, I couldn’t help but think of Rent, the musical that takes place in Alphabet City. It is an impossible ticket to come by—and ridiculously expensive—but Matthew had made it happen for my birthday. I felt a sharp pang of nostalgia and the beginning of a downward spiral, but I told myself to stay the course, literally and figuratively, just as I spotted a bar on the corner of Seventh and B, with Tudor-­paned windows and a red castle-arched doorway. It looked promising—soothing even—and I ducked inside, taking a seat at the horseshoe-­shaped bar.

And that’s how I got to this moment, staring at a cordless phone, nursing my second pint, listening to Dido go on and on about the best day of her life. My willpower crumbling, I pick up the receiver and begin to dial Matthew’s number. I get through all the digits except the last before I hear a deep voice behind me saying, Don’t do it.

Startled, I look over my shoulder and see a guy about my age, maybe a little older, staring down at me. He is tall—basketball player tall—with a five o’clock shadow and strong, dark features.

“What’d you say?” I ask, thinking I must have heard him wrong.

“I said, ‘Don’t do it.’ Don’t call him.” He is stone-­faced, but something in his brown eyes looks amused.

Too dumbfounded to issue an outright denial, I say, “What makes you think I was calling a him?”

He shrugs, takes the stool next to mine, and says, “Well? Am I right?”

I shrug, fight a smile, and tell him yeah, he’s right.

I stare at him, speechless, thinking that it’s almost as if he’s a secret agent hired by Scottie to spy on me. Or maybe he’s my personal guardian angel, like Clarence in It’s a Wonderful Life.

Meanwhile, the bartender returns, and my new stool mate orders a Jack and Coke while gazing up at the wall of liquor partitioning the bar. “And . . . let’s see . . . two shots of Goldschläger.”

“Goldschläger?” I say with a laugh. “Didn’t see that coming.”

I shake my head and tell him I don’t do shots.

“That’s a lie right there,” he says, smiling at me.

Emily Giffin is the author of ten internationally bestselling novels: Something Borrowed, Something Blue, Baby Proof, Love the One You’re With, Heart of the Matter, Where We Belong, The One & Only, First Comes Love, All We Ever Wanted, and The Lies That Bind. She lives in Atlanta with her husband and three children. 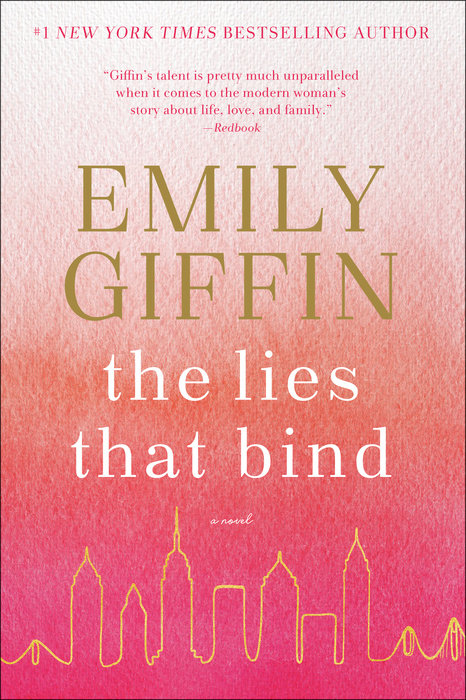