After a humiliating scandal, a young writer flees to the West Coast, where she is drawn into the morally ambiguous orbit of a charismatic filmmaker and the teenage girls who are her next subjects.

FINALIST FOR THE LAMBDA LITERARY AWARD • ONE OF BUZZFEED’S BEST BOOKS OF THE YEAR • “A blistering story about the costs of creating art.”—O: The Oprah Magazine

Not too long ago, Cass was a promising young playwright in New York, hailed as “a fierce new voice” and “queer, feminist, and ready to spill the tea.” But at the height of all this attention, Cass finds herself at the center of a searing public shaming, and flees to Los Angeles to escape—and reinvent herself. There she meets her next-door neighbor Caroline, a magnetic filmmaker on the rise, as well as the pack of teenage girls who hang around her house. They are the subjects of Caroline’s next semidocumentary movie, which follows the girls’ clandestine activity: a Fight Club inspired by the violent classic.

As Cass is drawn into the film’s orbit, she is awed by Caroline’s ambition and confidence. But over time, she becomes troubled by how deeply Caroline is manipulating the teens in the name of art—especially as the consequences become increasingly disturbing. With her past proving hard to shake and her future one she’s no longer sure she wants, Cass is forced to reckon with her own ambitions and confront what she has come to believe about the steep price of success.

An excerpt from We Play Ourselves

I exit LAX and the warm air slaps me awake. The first thing I smell is car exhaust. Then, just under it: desert. People are already upset, a traffic cop is shouting at a red sports car and waving her arms. I think: Turn around. I think: This is not your city.

Dylan’s van is farther up. I recognize it because there is only one of its kind in the world—­this is what Dylan said on the phone last night: “You’ll know it when you see it, it’s the only one of its kind in the world.” And here it is: spray-­painted silver, a big gaping mouth splashed across the front, rows of jaggy shark teeth. Two big cartoon eyes goggling out at the smog. The windows are cranked down all the way, and I catch a glimpse of Dylan before he sees me: head tilted back, shaggy mop of hair, bopping along to some featureless beat. He hasn’t changed since we were eighteen. In another fifty years he’ll still look like this.

As if feeling my gaze, Dylan’s eyes snap open—­electric blue—­and he’s staring straight at me in the rearview mirror. “Cass!”

I pull open the van door and a stink hits me. Not any smell I know. Something like tang and decay and sugar.

“Stingray died in here,” Dylan says, easy. He pulls me into a hug, ignoring the car behind us that has started to honk. “It’s so good to see you.”

Dylan lets me go, runs his hand through my hair—­“Even shorter than last time”—­and pulls us out into the circular creep of traffic around the terminal. “How was your flight?”

“Good.” I crank the window the rest of the way down and brace myself for more questions—­I did, after all, show up with only a day’s notice. But he’s navigating the bottleneck leading out of the airport, a frown line carving his forehead, paying exquisite attention to the road. I remember he drove like this in college too—­always the designated driver.

We’re quiet even after we get onto the highway. It all seems like a strange dream: the palm trees soaring up, up, up, increasingly unlikely parabolas of trunk that explode into fronds at the top. The light is desert light, and the 105 is packed bumper to bumper; it feels like everybody is breathing in unison, barely separated by the thin skins of our cars.

I didn’t sleep last night. I left my roommate Nico a month’s rent in cash, and a note in which I told him he could sell whatever furniture was mine and keep the money. He’s in Berlin for five weeks, and I was aware, as I slipped out, that my exit was neither honest nor brave. And yet the need to leave felt clearer than anything else had felt in the past several months. Or if what I felt was not clarity, at least it was adrenaline.

I told almost no one that I was leaving. There aren’t a lot of people who would care—­for the right reasons, I mean. People want to know what I’m doing about all of the messy aftermath so that they can report back to each other in low voices. Whether or not Tara-­Jean Slater is suing me; if it’s true that I got tased; that cops came; that the NYPD put out a bulletin; that my agency dropped me; that I’d been arrested but my agent paid bail; that my agent had refused to pay bail, and I’m still locked up somewhere in lower Manhattan; that Tara-­Jean Slater’s dad is an attorney and he got me moved to Rikers. Rikers feels like a reach to me, but then again, I’m supposed to be the one out of touch with reality, so what do I know. Maybe Rikers really was around the corner.

That isn’t why I left—­I didn’t think I was going to prison—­but whenever I ran into vague acquaintances, they looked surprised to see me in public. Eventually that starts to wear on you, and you stop leaving your apartment, and you become a shut-­in, and the only way to jog yourself loose from your life, from every detail of your life, is to abandon it.

Other than Dylan, I called only one person last night: Liz, my ex-­girlfriend. I was calling to say goodbye, because I felt like it might be strange if she ever came looking for me and I was simply gone, but before I could say anything, she was whispering furiously into the phone: “Cass, we can have coffee, sometimes, in a professional setting, but if you want to hire me for anything you should have your people call my people.” And then she paused and asked, “Do you still have people?” And that was insulting enough—­in part because of its accuracy—­that I hung up without saying anything at all.

I’m lost in my thoughts when Dylan says abruptly, “So, look, we’re really happy to have you, but I wanna give you a heads-­up about something.”

I snap back. Stingray smell. Dylan’s eyes, blue like some improbable crayon.

Dylan clears his throat, squints at the road. “About me and Daniel.”

“Uh . . . okay?” I’ve only met Dylan’s boyfriend a few times in the decade they’ve been together. Daniel is Australian, five years older than we are. He has always seemed very serious to me, someone who has an adult job and who takes nothing lightly.

Dylan sighs. I wait for any number of possibilities to enter the space between us. Daniel and I decided to charge you five thousand bucks a month. We’re starting a cult. We perform abortions in the living room.

“Okay,” Dylan says. “Well. Daniel and I are . . . in kind of a place.” He glances at me. “It’s this whole thing about how he never planned to stay in the U.S., and how I should know that, because even when we met he always said—­but the thing is, I don’t think he felt that way then. Which, maybe I just forgot, but my distinct impression was that Sydney was hell for him, because he wasn’t out in Sydney, and L.A. is like . . . you know. L.A.” This time Dylan says “L.A.” like it’s a synonym for paradise. I watch the asphalt ribbon of highway, wending slowly ahead of us, the yellow haze of polluted air hanging above it, and I say, “Uh-­huh,” in what I hope is an encouraging tone.

“And now he’s all like, ‘Sydney is my home, of course I’m going back, my parents live there, my sister had a baby,’ and he was looking for jobs in Sydney—­which, to be honest, I thought was a phase, because he’d go through them occasionally—­but then he found a job, and he accepted it, and he bought a plane ticket, and now he’s leaving January first.”

“No way,” I say, startled. Dylan and I haven’t stayed in close touch over the years, but whenever we’ve spoken, he’s been firmly ensconced in their house, in their life. Dylan was twenty-­three when they met, and as a consequence he is more accustomed to using “we” than “I.” Although I don’t know Daniel well, I think of his presence as a solid, unchanging fact. “January first,” I say. “Jesus. That’s very symbolic.” When Dylan darts his eyes from the road to my face, I know it was the wrong thing to say.

“Tickets are super cheap on January first,” Dylan tells me.

“He also didn’t tell me any of this until he’d decided,” Dylan blurts. “I was like, Well, let’s talk about this, and he was like, I bought the ticket. Which. I think . . .” And then Dylan presses his lips together in a firm line and doesn’t say what he thinks.

We sit in silence for a long moment. The traffic has slowed to a crawl, and Dylan stares intensely at the road, as if he’s punishing it. I say: “I’m sorry.”

“It’s life,” Dylan responds automatically, as if he’s had to tell this to a lot of different people over the past few weeks. Then, as the traffic starts moving again, he takes a deep breath, blows it out, and says, as if he’s back on track with the message he meant to deliver: “So! We’re in a place where we’re figuring out, uh, a lot of things. And we both wanted you to know that coming in. So that you’d sort of—­you know, if you come into the room and the energy is intense, you wouldn’t be . . .” He shrugs. “Bummed.”

“Got it,” I say. “And thanks for letting me stay right now.”

“No, no,” Dylan says quickly. “That’ll be good for us. Having a guest.” He grins with one side of his mouth. “Less screaming all around.”

“But if you do scream, I’ll consider myself well warned.”

I debate asking the question, and then can’t help it. “Do you think you’d move to Sydney?”

I wait for a follow-­up, but there isn’t one.

Jen Silverman is a New York-based writer, playwright, and screenwriter. Jen is the author of novel We Play Ourselves, which is short-listed for a Lambda Literary Award, the story collection The Island Dwellers, which was longlisted for a PEN/Robert W. Bingham Prize for debut fiction, and the poetry chapbook Bath, selected by Traci Brimhall for Driftwood Press. Additional work has appeared in Vogue, The Paris Review, Ploughshares, LitHub, The Yale Review, and elsewhere. Jen’s plays have been produced across the United States and internationally. Jen is a three-time MacDowell fellow, a member of New Dramatists, and the recipient of a New York Foundation for the Arts grant, a Lower Manhattan Cultural Council Fellowship, the Yale Drama Series Award, and a Playwrights of New York Fellowship. Jen is a 2022 National Endowment for the Arts Fellow for Prose and a 2022 Guggenheim Fellow for Drama. Jen also writes for TV and film. 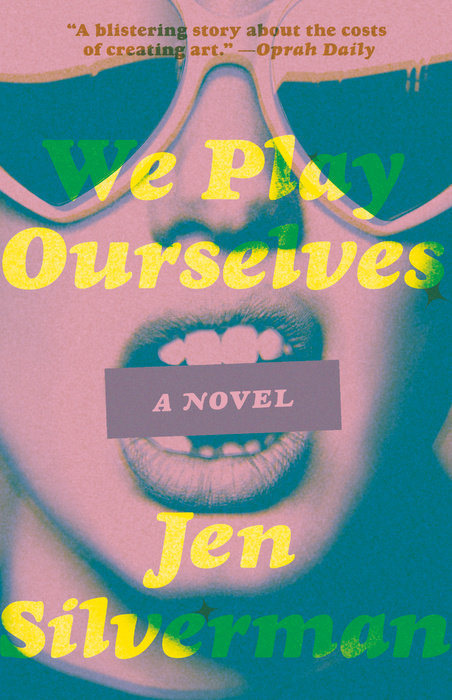