One of the most moving and eloquent accounts of the Holocaust, read by tens of millions of people around the world since its publication in 1947.

The Diary of a Young Girl is the record of two years in the life of a remarkable Jewish girl whose triumphant humanity in the face of unfathomable deprivation and fear has made the book one of the most enduring documents of our time.

The Everyman’s hardcover edition reprints the Definitive Edition authorized by the Frank estate, plus a new introduction, a bibliography, and a chronology of Anne Frank’s life and times.

An excerpt from The Diary of a Young Girl

From the Introduction by Francine Prose

Every masterpiece is unique, but some are more anomalous than others. If we consider all the volumes that have appeared so far in the Everyman series, the cornerstones and classics of our cultural tradition, The Diary of Anne Frank is, we may notice, the only one to have been written by a girl between the ages of thirteen and fifteen. If it seems improbable that a person of that tender age should have produced a work not just of maturity but of genius, that improbability only increases the awe we feel, or ought to feel, in the presence of a book that possesses all the qualities we expect of great memoirs and spiritual autobiographies, and, to some extent, of great novels.

Varied and memorable characters are revealed in all their complexity and depth, summoned to life on the page complete with all their most admirable virtues and most maddening flaws, their engagingly and appallingly human quirks and contradictions. We find ourselves in the presence of a singular consciousness, a highly particular and utterly persuasive narrative voice, elastic and capacious enough to encompass the most day-to-day details of domestic life (how to peel potatoes!), incisive portrayals of the ways in which people behave under enormous stress, flights of speculative metaphysics, and passages of sophisticated inquiry into the mystery of human nature. Comparing Anne Frank's diary to the Confessions of Saint Augustine, the poet John Berryman point out that the diary allows its readers to watch the growth of a soul, the simultaneously quotidian and miraculous transformation that accompanies what Berryman termed "the conversion of a child into a person," a process that, in his view, had never been so brilliantly or even adequately described before Anne Frank tracked it in herself, and recorded it in her diary. "It took, I believe," wrote Berryman, "a special pressure forcing the child-adult conversion, and exceptional self-awareness and exceptional candour and exceptional powers of expression, to bring that strange or normal change into view."

The diary reminds us of what it is like to go through a stage of life — adolescence — that all readers past childhood have endured and still remember, or have tried to forget. It speaks to us about the universal experiences of first love, family entanglements, hope and despair, society and solitude, terror and even boredom, and at the same time it reports on an utterly specific and exceptionally ugly period in our history, an era that is receding from living memory with every second that passes. Like all great art, it reveals something about the individual hand that created it, and something about what it means to be a human being — in this case, what is require to maintain human decency and compassion in the most inhuman and dehumanizing circumstances.

The Diary of Anne Frank is among the most widely read and taught and (for a variety of reasons, most often its delicate but clear-eyed portrayal of adolescent sexuality) most frequently censored texts in the world; translated from the original Dutch into dozens of languages, it appears on the curriculum of schools everywhere. Viewing Laurent Cantet's 2008 French film, The Class (Entre les murs), set in a high school in the suburbs of Paris, we watch a group of teenagers, nearly all of the first-generation immigrants to France, studying and discussing the diary. In 2004, a segment of the CBS series 60 Minutes reported that North Korean schoolchildren were being instructed to see themselves as Anne Frank, and George W. Bush as the modern equivalent of Hitler.

What most students learn is that Anne Frank began writing in the little book, with its checked cloth cover, soon after she received it as a gift from her parents on the occasion of her thirteenth birthday, in June 1942. Roughly a month after Anne commenced her giddy narrative of friends and boyfriends, childish allegiances and humorous experiences at school, her family went into hiding in a cramped attic (as it is often termed, though this common feature of Amsterdam canal-house construction more resembles what might be called a rear addition) above and behind the spice and pectin business her father Otto ran until the Nazi racial laws made it illegal for Otto, a Jew, to conduct any business at all.

For the next twenty-five months, until August 1944, when the Frank family was arrested and deported, first to the Westerbork transit camp and afterwards to Auschwitz, the Franks — Otto, his wife Edith, their daughters Margot and Anne — shared the "secret annex" with the Van Pels family (Hermann, Auguste, and their son Peter) and a dentist named Fritz Pfeffer. As those months wore on, Anne's vivid account of their lives in hiding developed into a very different kind of book from anything that she, newly turned thirteen, could have imagined that she would be confiding in her journal.

Anne Frank was born in 1929 in Germany. Her family moved to Amsterdam in 1933, and she died in the Bergen-Belsen concentration camp in 1945. Her diary, published as The Diary of a Young Girl, which documents her life in hiding from 1942 to 1944, is one of the world's most widely known books and has been the basis for several plays and films. 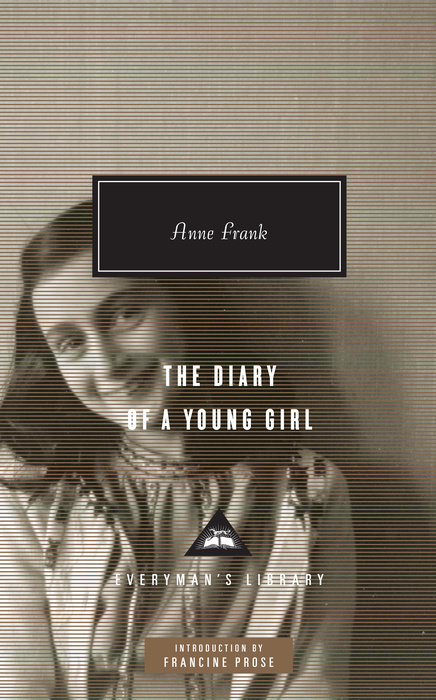