NATIONAL BESTSELLER • A woman returns to her small Maine hometown, uncovering family secrets that take her on a journey of self-discovery and new love, in this warm and charming novel from the New York Times bestselling author of Evvie Drake Starts Over.

“Moving and tender . . . A perfect book for anyone who feels a little separate from the flock.”—Rebecca Serle, New York Times bestselling author of One Italian Summer

ONE OF THE MOST ANTICIPATED BOOKS OF 2022—BookPage

Smarting from her recently canceled wedding and about to turn forty, Laurie Sassalyn returns to her Maine hometown of Calcasset to handle the estate of her great-aunt Dot, a spirited adventurer who lived to be ninety-three. Alongside boxes of Polaroids and pottery, a mysterious wooden duck shows up at the bottom of a cedar chest. Laurie’s curiosity is piqued, especially after she finds a love letter to the never-married Dot that ends with the line “And anyway, if you’re ever desperate, there are always ducks, darling.”

Laurie is told that the duck has no financial value. But after it disappears under suspicious circumstances, she feels compelled to figure out why anyone would steal a wooden duck—and why Dot kept it hidden away in the first place. Suddenly Laurie finds herself swept up in a righteous caper that has her negotiating with antiques dealers and con artists, going on after-hours dates at the local library, and reconnecting with her oldest friend and her first love. Desperate to uncover her great-aunt’s secrets, Laurie must reckon with her own past and her future—and ultimately embrace her own vision of flying solo.

With a cast of unforgettable characters and a heroine you will root for from page one, Flying Solo is a wonderfully original story about growing up, coming home, and learning to make a life for yourself on your own terms.

An excerpt from Flying Solo

She could have missed the duck entirely. It was at the very bottom of the cedar chest, and in the manner of the princess and the pea and the stack of mattresses, Laurie might have ignored it if she hadn’t pulled all the blankets out to see whether any of them seemed special.

The duck was about a foot long, made of wood, and lighter than she expected when she picked it up. She couldn’t even guess how old it was, since it looked pristine, like it had barely been touched. It was without a single visible scratch, and it was worked to a finish so smooth she could make out the thinnest brushstrokes in the paint with the tips of her fingers. The colors were bright: a green head and a reddish-­brown chest, a gold flush along the sides with blues and greens along the wings. Laurie stepped into the hall. “Now, why,” she said, standing with one hand on her hip and the duck in the other, “would a ninety-­three-­year-­old woman have had a wooden duck in a chest under three afghans and a quilt?”

“To get to the other side?” June called back from the living room.

“It’s not that kind of riddle.”

Laurie walked with it out into the living room, where June was working through the books. Or some of the books. Aunt Dot had them in practically every corner, stuffed into floor-­to-­ceiling built-­in shelves or sitting in stacks on the floor, in danger of tipping over. “I guess she had it for the same reason she has four feather boas and a signed picture of Steve McQueen.”

“She was ninety-­three. Why wouldn’t there be a duck?”

Laurie took out her phone and snapped a couple of pictures of the duck from different angles to show her mother. “It’s pretty, actually. I don’t know why it wouldn’t be out somewhere you could look at it. Everything else is.”

Dot’s whole house was an extravagant display case for the fruits of her adventures. There were postcards in patterned fabric boxes, home-­movie reels in bins with labels marked in ballpoint pen, and travel souvenirs that suggested impulsive shifts in Dot’s collecting philosophy. There were egg cups, spoons, and little dessert plates with scenes painted on them. She’d been to Rome, to Bangkok, to Buenos Aires and Mexico City. She’d camped in a trailer with two girlfriends in Yellowstone in the summer of 1952, and she’d wandered around China on her own in 1994, when she was in her sixties. In a photo from that trip that she must have convinced a stranger to take for her, she was next to the Great Wall, her gray hair gathered in a loose ponytail at the back of her neck. She wore a light denim jacket with a patch of Elton John’s face on the arm.

Dot had tried just about everything they taught at the community college—­and kept every course catalog—­and her work and supplies were stacked and stored in one of the bedrooms. Ceramics, cross-­stitch, knitting, scrapbooks with stenciled titles like “Christmas 2003: Cold as Hell.” Painting, sketching, calligraphy, beaded bracelets strung on fishing line. There was a big blue plastic bin at the bottom, under all the boxes of crafts, that said in progress/unfinished. Those were destined to remain so now.

There was a small stash of love letters from some of Dot’s known boyfriends: Paul, the teacher; John, the chemist; Andrew, the journalist. There was also one without an envelope that was signed “M,” which Laurie suspected might have been from a woman, based on the handwriting. (Again: She was ninety-­three. Why wouldn’t there be a woman?) Laurie set aside but did not read these, for the simple reason that she wouldn’t want anyone to read her letters after she was dead. It seemed wrong, though, to throw them away, so she’d just left them in their shoebox labeled correspondence, special and set it on the bed.

Laurie dropped onto the couch. “Take a break with me,” she said. “I finished with the jewelry box, and I cannot start a box labeled cameras and 8-­track tapes without sustenance.”

“Just keep petting that duck,” June said, getting off her knees and passing Laurie on her way to the kitchen. “You want an iced tea?”

“You know what I’m talking about,” Laurie said. “I’ve been doing this for a week and a half, and I already have scratches all over my hands from tearing boxes open and a sore shoulder for no reason I can particularly pinpoint. And I have to be here. You’re just here because you’re a good person.”

“I’ve got news for you,” June said, over the sound of ice clinking into glasses. “When you’re the one relative who shows up instead of just letting Goodwill take everything in the house, you are also a good person.”

Laurie puffed out a breath. “It made the most sense. I didn’t want everything she owned to vanish just because she didn’t get married or have kids. Nobody else had the time.”

June appeared with the drinks in two of Dot’s tall glasses, crisscrossed with a chunky diamond pattern. “I don’t know. Four brothers, and you wind up holding the bag?” she said as she sat down. “Regardless, I’m very happy to be talking to you somewhere other than FaceTime. I like seeing your beautiful face in person.”

“You’re very sweet, given how sweaty and disgusting I am, and I feel the same way. I thought I was going to see you in person at the wedding I didn’t end up having, so I’m glad I had an excuse. Honestly, it’s a particularly good time to see old friends, since everyone I know in Seattle also knows Chris, and I have no idea whether any of them likes me anymore. And even if they do, I definitely don’t want them to throw me a fortieth birthday pity party based on the assumption that I have given up my last chance at happiness and will now shrivel up like a prune.”

“Nobody thinks that,” June said, rolling her eyes.

“Tell it to When Harry Met Sally.”

“What does that mean?”

“Well, do you remember the part of that movie where Harry goes over to see Sally, and she’s crying in her bathrobe because her ex-­boyfriend, that guy who’s Gerald Ford’s son, is getting married?”

“That guy is Gerald Ford’s son?”

“Yes. And she starts crying, and she’s very depressed, and she says through these really pitiful tears, ‘And I’m gonna be forty.’ And he says, ‘When?,’ and she says, ‘Someday.’ That’s the first punchline. The second punchline is that he says she’s going to be forty in eight years.”

At Laurie’s expectant look, June shook her head. “I don’t get it yet. Keep going.”

Linda Holmes is a novelist, a pop culture correspondent for NPR, and one of the hosts of the popular podcast Pop Culture Happy Hour, which has held sold-out live shows in New York, Los Angeles, Washington, D.C., and elsewhere. She appears regularly on NPR radio shows including Morning Edition, All Things Considered, and Weekend Edition. Before NPR, she wrote for New York magazine online and for TV Guide, as well as for the groundbreaking website Television Without Pity. Her first novel, Evvie Drake Starts Over, was a New York Times bestseller. In her free time, she watches far too many romantic comedies, bakes bread, plays with her wonderful dog, and tries to keep various plants thriving. 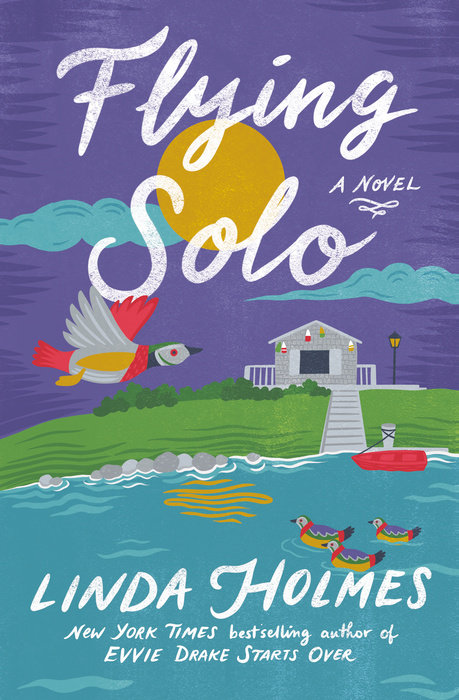