A rediscovered classic of science fiction, set in a dystopian twenty-second-century society where the winner takes all, a precursor to The Hunger Games by one of the genre’s first major female writers—with an introduction by Naomi Alderman, New York Times bestselling author of The Power and Disobedience

Philadelphia, 1918: Three friends—brave, confident Viola Trenmore, clever but shy Robert Drayton, and Viola’s strong and hot-tempered brother, Terry—discover a mysterious powder that transports them two hundred years into the future. The Philadelphia of 2118 is no longer a bustling metropolis but instead a completely isolated city recovering from an unknown disaster. Citizens are issued identification tags instead of having names, and society is split between a wealthy, powerful minority and a downtrodden lower class. The position of supreme authority is held by a woman, and once a year she oversees competitions to the death to determine who rules alongside her. When Viola, Terry, and Robert are forced to take part in these strange and deadly games, it will take their combined wits for them to escape this strange world and return home.

Equal parts adventure and dystopia, The Heads of Cerberus is an unjustly forgotten work of early science fiction written by a trailblazing master of the genre.

Praise for The Heads of Cerberus

“An early-twentieth-century time-travel dystopia whose vision of 2118 resonates eerily with our own century . . . a fast-paced, imaginative yarn.”—Kirkus Reviews

An excerpt from The Heads of Cerberus

In his first moments of stunned surprise it seemed to Drayton that the end of all things had come. The maddest, most impossible surmises flashed across his mind. He scarcely would have felt further amazement had Lucifer himself, in all the traditional panoply of hoofs, tail, and brimstone, risen sudden and flaming through the midst of that dreary-hued heap of mysterious Dust. Had the tables and chairs begun to move about the room on their own legs it would have appeared only the natural sequel to such an event as had just transpired. Indeed, it seemed strangely terrible that nothing more should occur. That Nature, having broken her most sacred law, the indestructibility of matter, should carry her sacrilege no further.

But had that law been broken? Was it possible that by some unheard-of property the gray powder had noiselessly, without shock or visible sign of explosion resolved the great body of his friend into the component gases to which all matter may, in one way or another, be reduced? Or was he, Robert Drayton, stark mad, and had the whole absurd, horrible episode been a part of some delirious dream?

There lay the crystal vial on the floor, where he had dropped it in his first dismay. There was the newspaper, with half of a bargain-sale advertisement extending from beneath the gray heap. And now he became aware that in the library a bell was ringing with regular, monotonous persistence.

Scarcely knowing what he did, Drayton crossed the room and lifted the telephone receiver from its hook.

Drayton dropped the receiver and stood staring in blank horror. After a while, leaving the receiver to dangle and click unheeded, he turned and walked slowly back toward the chair on whose broad arm Terence Trenmore's cigar still glowed behind a lengthening ash. With a slight shudder he forced himself to pass his hands carefully over the chair's entire inner surface, seat, arms, and back. The leather covering retained a trace of warmth from its recent occupant; but it was most indubitably empty.

The enormity, the unprecedented horror of the whole situation swept up on Drayton like a rising tide, wiping out for a time all thought of the telephone or the person to whom he had just been speaking. With a dazed, sick look he again circled the newspaper and its burden, righted his own chair, and sat down. He had a queer feeling that some one had just played a particularly cruel practical joke of which he was the victim.

And yet--what if that gray Dust had really possessed just the terrific, unbelievable history with which Trenmore had credited it?

He strove to arrange his facts and premises in a logical and reasonable order, but found himself continually returning to that one scene--he, Drayton, sitting where he now sat; Trenmore opposite, bending over the paper; the cloud that rose, gray and nebulous, and hung in the air after his friend was gone.

Presently he was again roused from his stupor, and again by a bell. The sound came faintly from the rear of the house. Drayton waited, thinking to hear Martin pass through the reception hall on his way to the front door. Again the bell rang, and this time in a long, steady, insistent peal. Some one seemed to have placed a finger on the button and determined that it should not be removed until the door opened. Martin must be out, on an errand perhaps.

Half dazedly, as he had answered the phone, Drayton at length responded to this new demand. As he unlocked the front door and opened it a burst of summer sunshine rushed in and with it the small, angry figure of a much perturbed young lady.

"Where is he? What has happened to my brother? Who was that man at the telephone? Answer me instantly, I say! Where is my brother, Terry Trenmore?"

The questions beat upon Drayton's ears like blows, rousing him to some semblance of his normal self-possession.

"You are--you are Miss Trenmore?" he asked in turn, though a sudden conscience-stricken remembrance smote him and assured him that she was. He had terminated that telephone conversation so very abruptly. No doubt the girl had run in from Atlantic City to see her brother, called him up, and--

"I am Viola Trenmore, and I want my brother. Where is he?"

Drayton faced her with a feeling of helpless fright, though in herself, Trenmore's sister was of no terrifying appearance. Nearly as little as her brother was large, she looked even younger than the seventeen years Drayton knew to be hers. She had her brother's eyes, azure as an Italian sky, and her straight, fine brows and curling lashes were black--beautifully so and in vivid contrast to the clear white and rose of her eager face, flushed now like an excited child's. Her small, modish hat, trim pumps, and tailored suit, all matched in color the bright, clear hue of her eyes. Despite his desperate preoccupation, Drayton's first sight of Viola Trenmore brought him the same momentary flash of joy that comes with the sight of a bluebird in springtime. She was like a bluebird, fluttering in from the sunshine. His troubled mind scarcely recognized the thought, but always afterward he remembered that first beauty of her as the flash of a bluebird's wing.

"What have you done with him?" she demanded, while from those blue eyes there blazed the very twin spirit of Terence Trenmore--Terence the impetuous, angered and scorning all caution.

"I hardly know what to tell you, Miss Trenmore," began Drayton hesitatingly. "Your brother is not here. He has gone. Oh, but I don't myself know what has happened, or whether I am sane or crazy! Come in here, Miss Trenmore, and you shall at least hear the story."

Puzzled now, and watching him with a sort of alert wariness, Viola obeyed his gesture and entered the library. And there, in halting, broken sentences, Drayton told his incredible tale. He showed her the Dust on the paper, the empty crystal vial, the half-smoked cigar, whose fire had expired some minutes since, like a last living trace of the man who had lighted it.

And somehow, as Drayton talked, he knew that it was all true, and that Trenmore was dead. Dead and dissipated to the elements as thoroughly as if, instead of a bare half hour, ten thousand years had slipped by since his going. Grief clutched Drayton's throat and he finished his story in a hoarse, barely audible whisper.

"And so--he was gone! Like that. And nothing left. Nothing but that infernal stuff there that--that murdered him--my friend!"

For one moment the girl stood silent, and Drayton thought that she also was dazed, as he had been. But suddenly she flung back her head with Trenmore's very gesture.

"I don't believe you!" she cried vehemently. "I don't believe you! Did you expect me to believe you? Do you take me for an infant? Who are you that are here in my cousin's house, answer his telephone and his door, and meet me with this mad lie about Terry? I recognize that vial! And I know that some one has been trying to steal it from my brother. Are you that thief, and have you murdered Terry, as you threatened you would?"

She advanced upon him, her eyes two pools of blue, indignant fire; but the man stood his ground. "I am Robert Drayton," he said.

"Robert Drayton! But you can't be. Mr. Drayton is a good friend of Terry's, though I've never met him, and some way you know that and hope to deceive me! Mr. Drayton would not treat me like this. He would not lie to me. He would not-" Sobbing at last, she broke off and clenched her little hands fiercely. "I'll show you!" she cried. "I'll show you what I think of you and your lies, and then I'll make you tell me the true story!"

Before Drayton, springing forward with a cry of wild protest, could prevent, she had dropped on her knees beside the heap of Dust. Another instant and her white-gloved fingers had again raised that ominous gray cloud.
It rose in a spiral swirl--

For a second Drayton still saw her as a vague, translucent blur of blue shading into pink where her face had been. Then the air shimmered and cleared, and once more the unfortunate young man stood alone in Burford's pleasant library. This time not so much as a lighted cigar remained to remind him of recent companionship.

Mr. Robert Drayton began to swear. Serious profanity had never come easily to his lips. Now, however, he heard himself using phrases and words which he had not even been aware that he knew; a steady, low-voiced, earnest stream of expression whose utterance gave him the strangest satisfaction and relief. He swore for two minutes without a pause, then trailed off into silence. The superhuman tension had been broken, however, and he could again think.

This abruptness and totality of disappearance, that left him not so much as a corpse to mourn, awoke in him emotions different from any he had ever experienced. He found that he could not think of Trenmore and his sister as other than alive, nor rid himself of the idea that in some way they were yet present in the library. Not though the very clearest memory informed him that before his eyes those two had been resolved to nothingness.

Pondering on what he should do, however, it came to him that in honor only one course lay open. Had he been content to indulge Trenmore's superstitious regard for that infernal Dust, he would have been left confronting no such ghastly mystery. The fault, by this reckoning, was his. Let him pay, then.

Francis Stevens was the pen name of Gertrude Barrows Bennett (1883–1948). Bennett was the first major female writer of science fiction and fantasy in the United States, and has been credited as the inventor of the subgenre of dark fantasy. 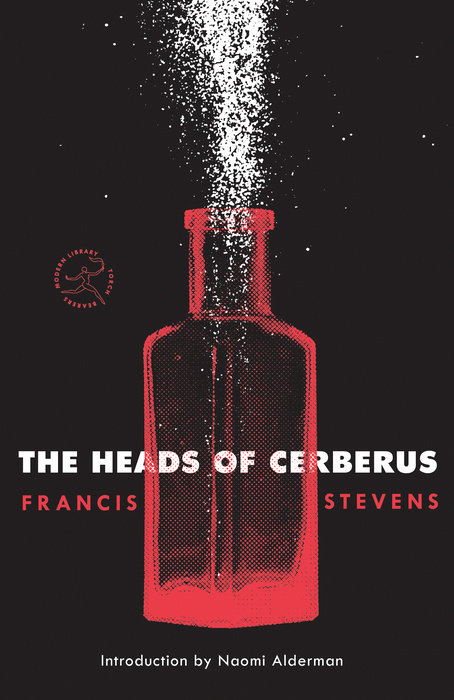