A groundbreaking Dakota author and activist chronicles her refusal to assimilate into nineteenth-century white society and her mission to preserve her culture—with an introduction by Layli Long Soldier, winner of the National Book Critics Circle Award and the PEN/Jean Stein Book Award for Whereas

Bright and carefree, Zitkála-Šá grows up on the Yankton Sioux reservation in South Dakota with her mother until Quaker missionaries arrive, offering the reservation’s children a free education. The catch: They must leave their parents behind and travel to Indiana. Curious about the world beyond the reservation, Zitkála-Šá begs her mother to let her go—and her mother, aware of the advantages that an education offers, reluctantly agrees.

But the missionary school is not the adventure that Zitkála-Šá expected: The school is a strict one, her long hair is cut short, and only English is spoken. She encounters racism and ridicule. Slowly, Zitkála-Šá adapts to her environment—excelling at her studies, winning prizes for essay-writing and oration. But the price of success is estrangement from her cultural roots—and is it one she is willing to pay?

Combining Zitkála-Šá’s childhood memories, her short stories, and her poetry, American Indian Stories is the origin story of an activist in the making, a remarkable woman whose extraordinary career deserves wider recognition.

An excerpt from American Indian Stories

A wigwam of weather-­stained canvas stood at the base of some irregularly ascending hills. A footpath wound its way gently down the sloping land till it reached the broad river bottom; creeping through the long swamp grasses that bent over it on either side, it came out on the edge of the Missouri.

Here, morning, noon, and evening, my mother came to draw water from the muddy stream for our household use. Always, when my mother started for the river, I stopped my play to run along with her. She was only of medium height. Often she was sad and silent, at which times her full arched lips were compressed into hard and bitter lines, and shadows fell under her black eyes. Then I clung to her hand and begged to know what made the tears fall.

“Hush; my little daughter must never talk about my tears”; and smiling through them, she patted my head and said, “Now let me see how fast you can run today.” Whereupon I tore away at my highest possible speed, with my long black hair blowing in the breeze.

I was a wild little girl of seven. Loosely clad in a slip of brown buckskin, and light-­footed with a pair of soft moccasins on my feet, I was as free as the wind that blew my hair, and no less spirited than a bounding deer. These were my mother’s pride,—­my wild freedom and overflowing spirits. She taught me no fear save that of intruding myself upon others.

Having gone many paces ahead I stopped, panting for breath, and laughing with glee as my mother watched my every movement. I was not wholly conscious of myself, but was more keenly alive to the fire within. It was as if I were the activity, and my hands and feet were only experiments for my spirit to work upon.

Returning from the river, I tugged beside my mother, with my hand upon the bucket I believed I was carrying. One time, on such a return, I remember a bit of conversation we had. My grown-­up cousin, Warca-­Ziwin (Sunflower), who was then seventeen, always went to the river alone for water for her mother. Their wigwam was not far from ours; and I saw her daily going to and from the river. I admired my cousin greatly. So I said: “Mother, when I am tall as my cousin Warca-­Ziwin, you shall not have to come for water. I will do it for you.”

With a strange tremor in her voice which I could not understand, she answered, “If the paleface does not take away from us the river we drink.”

“Mother, who is this bad paleface?” I asked.

“My little daughter, he is a sham,—­a sickly sham! The bronzed Dakota is the only real man.”

I looked up into my mother’s face while she spoke; and seeing her bite her lips, I knew she was unhappy. This aroused revenge in my small soul. Stamping my foot on the earth, I cried aloud, “I hate the paleface that makes my mother cry!”

Setting the pail of water on the ground, my mother stooped, and stretching her left hand out on the level with my eyes, she placed her other arm about me; she pointed to the hill where my uncle and my only sister lay buried.

“There is what the paleface has done! Since then your father too has been buried in a hill nearer the rising sun. We were once very happy. But the paleface has stolen our lands and driven us hither. Having defrauded us of our land, the paleface forced us away.

“Well, it happened on the day we moved camp that your sister and uncle were both very sick. Many others were ailing, but there seemed to be no help. We traveled many days and nights; not in the grand, happy way that we moved camp when I was a little girl, but we were driven, my child, driven like a herd of buffalo. With every step, your sister, who was not as large as you are now, shrieked with the painful jar until she was hoarse with crying. She grew more and more feverish. Her little hands and cheeks were burning hot. Her little lips were parched and dry, but she would not drink the water I gave her. Then I discovered that her throat was swollen and red. My poor child, how I cried with her because the Great Spirit had forgotten us!

“At last, when we reached this western country, on the first weary night your sister died. And soon your uncle died also, leaving a widow and an orphan daughter, your cousin Warca-­Ziwin. Both your sister and uncle might have been happy with us today, had it not been for the heartless paleface.”

My mother was silent the rest of the way to our wigwam. Though I saw no tears in her eyes, I knew that was because I was with her. She seldom wept before me.

During the summer days my mother built her fire in the shadow of our wigwam.

In the early morning our simple breakfast was spread upon the grass west of our tepee. At the farthest point of the shade my mother sat beside her fire, toasting a savory piece of dried meat. Near her, I sat upon my feet, eating my dried meat with unleavened bread, and drinking strong black coffee.

The morning meal was our quiet hour, when we two were entirely alone. At noon, several who chanced to be passing by stopped to rest, and to share our luncheon with us, for they were sure of our hospitality.

My uncle, whose death my mother ever lamented, was one of our nation’s bravest warriors. His name was on the lips of old men when talking of the proud feats of valor; and it was mentioned by younger men, too, in connection with deeds of gallantry. Old women praised him for his kindness toward them; young women held him up as an ideal to their sweet-­hearts. Every one loved him, and my mother worshiped his memory. Thus it happened that even strangers were sure of welcome in our lodge, if they but asked a favor in my uncle’s name.

Though I heard many strange experiences related by these wayfarers, I loved best the evening meal, for that was the time old legends were told. I was always glad when the sun hung low in the west, for then my mother sent me to invite the neighboring old men and women to eat supper with us. Running all the way to the wigwams, I halted shyly at the entrances. Sometimes I stood long moments without saying a word. It was not any fear that made me so dumb when out upon such a happy errand; nor was it that I wished to withhold the invitation, for it was all I could do to observe this very proper silence. But it was a sensing of the atmosphere, to assure myself that I should not hinder other plans. My mother used to say to me, as I was almost bounding away for the old people: “Wait a moment before you invite any one. If other plans are being discussed, do not interfere, but go elsewhere.”

The old folks knew the meaning of my pauses; and often they coaxed my confidence by asking, “What do you seek, little granddaughter?”

“My mother says you are to come to our tepee this evening,” I instantly exploded, and breathed the freer afterwards.

“Yes, yes, gladly, gladly I shall come!” each replied. Rising at once and carrying their blankets across one shoulder, they flocked leisurely from their various wigwams toward our dwelling.

My mission done, I ran back, skipping and jumping with delight. All out of breath, I told my mother almost the exact words of the answers to my invitation. Frequently she asked, “What were they doing when you entered their tepee?” This taught me to remember all I saw at a single glance. Often I told my mother my impressions without being questioned.

While in the neighboring wigwams sometimes an old Indian woman asked me, “What is your mother doing?” Unless my mother had cautioned me not to tell, I generally answered her questions without reserve.

At the arrival of our guests I sat close to my mother, and did not leave her side without first asking her consent. I ate my supper in quiet, listening patiently to the talk of the old people, wishing all the time that they would begin the stories I loved best. At last, when I could not wait any longer, I whispered in my mother’s ear, “Ask them to tell an Iktomi story, mother.”

Soothing my impatience, my mother said aloud, “My little daughter is anxious to hear your legends.” By this time all were through eating, and the evening was fast deepening into twilight.

As each in turn began to tell a legend, I pillowed my head in my mother’s lap; and lying flat upon my back, I watched the stars as they peeped down upon me, one by one. The increasing interest of the tale aroused me, and I sat up eagerly listening to every word. The old women made funny remarks, and laughed so heartily that I could not help joining them.

Zitkala-Sa (1876–1938) was born Gertrude Simmons at the Yankton Reservation in South Dakota. Writer, teacher, and activist, she was editor of American Indian Magazine and founder of the National Council of American Indians, the tribaladvocacy group that she led until her death. 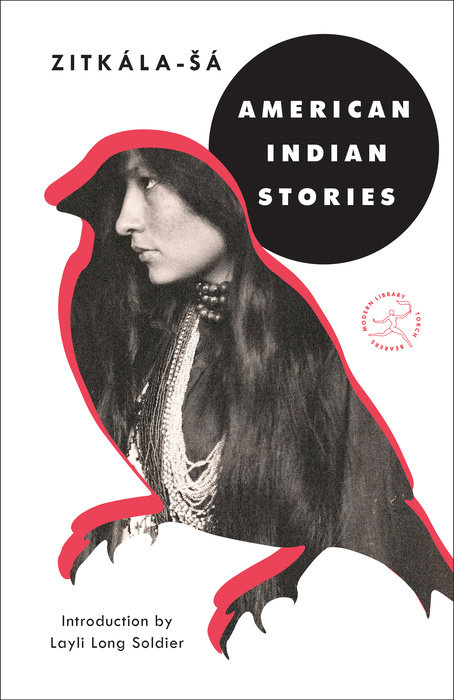