“If Austen was the first queen of the contemporary romance . . . Heyer is the first of the historical romance.”—From the foreword by Sarah MacLean, New York Times bestselling author of Nine Rules to Break When Romancing a Rake

He’s unruly. Unrefined. Unfashionable. But is that what she loves about him?

Previously published as Powder and Patch, this edition features the restored final chapter.

Cleone Charteris never had to look far to find an eligible bachelor. Her neighbor and best friend since childhood has made no secret of his intentions to marry her. Now that he’s a full-grown man, there’s only one small problem: He disdains art, fashion, and etiquette—all the things that Cleone cherishes most. If only it were possible to improve a man. . . .

Philip Jettan doesn’t think there’s anything wrong with a man preferring manly things, but he’ll do whatever it takes to win Cleone’s heart. So Philip travels to Paris, where, under the tutelage of the Marquis de Château-Banvau, he learns to duel, to write poetry, to find the perfect accessory for any outfit. But when the country bumpkin returns home a stylish dandy, he faces an unexpected challenge: convincing Cleone that he’s still the same boy who’s always loved her.

The Modern Library Torchbearers series features women who wrote on their own terms, with boldness, creativity, and a spirit of resistance:

An excerpt from The Transformation of Philip Jettan

If you searched among the Downs in Sussex, somewhere between Midhurst and Brighthelmstone, inland a little, and nestling in modest seclusion between two waves of hills, you would find Little Fittledean, a village round which three gentlemen had built their homes. One chose the north side, half a mile away, and on the slope of the Downs. He was Mr. Winton, a dull man with no wife, but two children, James and Jennifer. The second built his house west of the village, not far from the London Road and Great Fittledean. He was one Sir Thomas Jettan. He chose his site carefully, beside a wood, and laid out gardens after the Dutch style. That was way back in the last century when Charles the Second was King, and what had then been a glaring white erection, stark naked and blatant in its sylvan setting, was now, some seventy years later, a fair place, creeper-hung, and made kindly by the passing of the years. The Jettan who built it became inordinately proud of the house. Never a day passed but he would strut round the grounds, looking at the nude structure from a hundred different points of vantage. It was to be the country seat of the Jettans in their old age; they were to think of it almost as they would think of their children. It was never to be sold; it was to pass from father to son and from son to grandson through countless ages. Nor must it accrue to a female heir, be she never so direct, for old Tom determined that the name of Jettan should always be associated with the house.

Old Tom propounded these notions to the whole countryside. All his friends and his acquaintances were shown the white house and told the tale of its owner’s past misdemeanours and his present virtue—a virtue due, he assured them, to the possession of so fair an estate. No more would he pursue the butterfly existence that all his ancestors had pursued before him. This house was his anchor and his interest; he would rear his two sons to reverence it, and it might even be that the tradition which held every Jettan to be a wild fellow at heart should be broken at last.

The neighbours laughed behind their hands at old Tom’s childishness. They dubbed the hitherto unnamed house “Tom’s Pride,” in good-humoured raillery.

Tom Jettan was busy thinking out a suitable name for his home when the countryside’s nickname came to his ears. He was not without humour in spite of his vanity, and when the sobriquet had sunk into his brain, he chuckled deep in his chest, and slapped his knee in appreciation. Not a month later the neighbours were horrified to find, cunningly inserted in the wrought-iron gates of the white house, a gilded scroll bearing the legend, “Jettan’s Pride.” No little apprehension was felt amongst them at having their secret joke thus discovered and utilised, and those who next waited on Tom did so with an air of ashamed nervousness. But Tom soon made it clear that, far from being offended, he was grateful to them for finding an appropriate name for his home.

His hopeful prophecy concerning the breaking of tradition was not realised in either of his sons. The elder, Maurice, sowed all the wild oats of which he was capable before taking up his abode at the Pride; the other, Thomas, never ceased sowing wild oats, and showed no love for the house whatsoever.

When old Tom died he left a will which gave Maurice to understand that if, by the time he was fifty years of age, he still refused to settle down at the Pride, it was to pass to his brother and his brother’s heirs.

Thomas counselled Maurice to marry and produce some children.

“For damme if I do, my boy! The old man must have lost his faculties to expect a Jettan to live in this hole! I tell ye flat, Maurice, I’ll not have the place. ’Tis you who are the elder, and you must assume the—the responsibilities!” At that he fell a-chuckling, for he was an irrepressible scamp.

“Does the will allow it?” asked Tom doubtfully.

“It does not forbid it. And I shall get me a wife.”

At that Tom burst out laughing, but checked himself hurriedly as he met his brother’s reproving eye.

“God save us, and the old gentleman but three days dead! Not that I meant any disrespect, y’know. Faith, the old man ’ud be the first to laugh with me, stap me if he wouldn’t!” He stifled another laugh, and shrugged his shoulders. “Or he would before he went crazy pious over this devilish great barn of a house. You’ll never have the money to keep it, Maurry,” he added cheerfully, “let alone a wife.”

“My father has left even more than I expected,” he said.

“Nay, I hope to husband a wife. The rest I’ll leave to her.”

Tom came heavily to his feet. He stared at his brother, round-eyed.

“Blister me, but I believe the place is turning you like the old gentleman! Now, Maurry, Maurry, stiffen your back, man!”

“It’ll take more than the Pride to reform me, Tom. I’m thinking that the place is too good to sell or throw away.”

“If I could lay my hand on two thousand guineas,” said Tom, “anyone could have the Pride for me!”

“Why, Tom, all I’ve got’s yours, you know very well! Take what you want—two thousand or twenty.”

“Devilish good of you, Maurry, but I’ll not sponge on you yet. No, don’t start to argue with me, for my head’s not strong enough what with one thing and another. Tell me more of this wife of yours. Who is it to be?”

“I haven’t decided,” replied Maurice. He yawned slightly. “There are so many to choose from.”

“Ay—you’re an attractive devil—’pon my word you are! What d’ye say to Lucy Farmer?”

“Spare me. I had thought of Marianne Tempest.”

“What, old Castlehill’s daughter? She’d kill you in a month, lad.”

“Then what do you think of Jane Butterfield?”

Thomas pulled at his lip, irresolute.

“I’m not decrying the girl, Maurice, but Lord! could you live with her?”

“I’ve not essayed it,” answered Maurice.

“No, and marriage is so damned final! ’Tisn’t as though ye could live together for a month or so before ye made up your minds. I doubt the girl would not consent to that.”

“And if she did consent, one would not desire to wed her,” remarked Maurice. “A pity. No, I believe I could not live with Jane.”

“The truth of it is, Maurry, we Jettans must marry for love. There’s not one of us ever married without it, whether for money or no.”

“ ’Tis so unfashionable,” objected Maurice. “One marries for convenience. One may have fifty different loves.”

“What! All at once? I think you’d find that a trifle inconvenient, Maurry! Lord! just fancy fifty loves, oh, the devil! And three’s enough to drive one crazed, bruise me if ’tis not.”

“Gad no! Fifty loves spread over a lifetime, and you’re not bound to one of them. There’s bliss, Tom, you rogue!”

Thomas shook a wise finger at him, his plump, good-humoured face solemn all at once.

“And not one of them’s the true love, Maurry. For if she were, faith, she’d not be one of fifty! Now, you take my advice, lad, and wait. Damme, we’ll not spoil the family record!

Marriage for love, and a staid old age.

“I don’t know that it’s true about the staid old age, though. Maybe ’tis only those who wed for love who acquire virtue. Anyway, you’ll not break the second maxim, Maurry.”

Thomas had risen again. Now he slipped his arm in his brother’s.

“If it comes to prevention, old sobersides, I’m game. I’ll make an uproar in the church and carry off the bride. Gad, but ’twould be amusing! Carry off one’s brother’s bride, under his stern nose. Devil take it, Maurry, that’s just what your nose is! I never thought on’t before—stern, grim old—now, steady, Tom, my boy, or you’ll be laughing again with the old gentleman not yet underground!”

Maurice waited for his brother’s mirth to abate.

“But, Tom, ’tis very well for you to counsel me not to wed without love! I must marry, for ’tis certain you’ll not, and we must have heirs. What’s to be done, I’d like to know?”

“Wait, lad, wait! You’re not so old that you can’t afford to hold back yet awhile.”

“Then you have fifteen years to run before you need settle down. Take my advice, and wait!”

Georgette Heyer who wrote over fifty novels died in 1974. 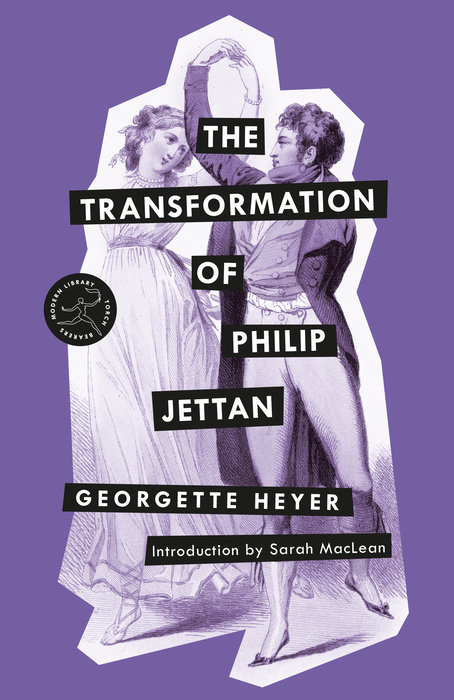