A young Japanese woman leaves the only home she’s ever known for married life in nineteenth-century Ohio in this delightful, charming memoir, a tribute to the struggles of the first generation of Japanese immigrants—with an introduction by Karen Tei Yamashita and Yuki Obayashi

The youngest daughter of a high-ranking samurai in late-nineteenth-century Japan, Etsu Inagaki Sugimoto is originally destined to be a Buddhist priestess. She grows up a curly haired tomboy in snowy Echigo, certain of her future role in her community. But as a young teenager, she is instead engaged to a Japanese merchant in Ohio—and Etsu realizes she will eventually have to leave the only world she has ever known for the United States.

Etsu arrives in Cincinnati as a bright-eyed and observant twenty-four-year-old, puzzled by the differences between the two cultures and alive to the contradictions, ironies, and beauties of both. Her memoir, reprinted for the first time in decades, is an unforgettable story of a strong and determined woman.

An excerpt from A Daughter of the Samurai

Japan is often called by foreign people a land of sunshine and cherry blossoms. This is because tourists generally visit only the eastern and southern parts of the country, where the climate is mild all the year round. On the northwest coast the winters are long, snow often covering the ground from December to March or April.

In the province of Echigo, where was my home, winter usually began with a heavy snow which came down fast and steady until only the thick, round ridge-­poles of our thatched roofs could be seen. Then groups of coolies, with straw mats over their shoulders and big woven hats that looked like umbrellas, came and with broad wooden shovels cut tunnels through from one side of the street to the other. The snow was not removed from the middle of the street all winter. It lay in a long pile, towering far above the house-­tops. The coolies cut steps, for they were carrying snow at intervals all winter, and we children used to climb up and run along the top. We played many games there, sometimes pretending we were knights rescuing a snow-­bound village, or fierce brigands stealing upon it for an attack.

But a still more exciting time for us was before the snow came, when the entire town was making preparations for winter. This always took several weeks, and each day as we went to and from school we would stop to watch the coolies busily wrapping the statues and small shrines along the streets in their winter clothing of straw. The stone lanterns and all the trees and bushes of our gardens were enclosed in straw, and even the outside walls of the temples were protected by sheets of matting fastened on with strips of bamboo, or immense nettings made of straw rope. Every day the streets presented a new appearance, and by the time the big carved lions at the temple steps were covered, we were a city of grotesque straw tents of every shape and size, waiting for the snow that would bury us in for three or four months.

Most large houses had thatched roots with wide eaves, but the shops on the streets had shingled roofs weighted with stones to prevent avalanches when the snow began to melt in the spring. Above all the sidewalks extended a permanent roof, and during the winter the sidewalks were enclosed by walls of upright boards with an occasional panel of oiled paper, which turned them into long halls, where we could walk all over town in the stormiest weather, entirely protected from wind and snow. These halls were dim, but not dark, for light shines through snow pretty well, and even at the street corners, where we crossed through the snow tunnels, it was light enough for us to read good-­sized characters. Many a time, coming home from school, I have read my lessons in the tunnel, pretending that I was one of the ancient sages who studied by snow-­light.

Echigo, which means “Behind the Mountains,” is so shut off from the rest of Japan by the long Kiso range that during the early feudal days it was considered by the Government only a frozen outpost suitable as a place of exile for offenders too strong in position or influence to be treated as criminals. To this class belonged reformers. In those days Japan had little tolerance for reforms either in politics or religion, and an especially progressive thinker at court or a broad-­minded monk was branded as equally obnoxious and sent to some desolate spot where his ambitions would be permanently crushed. Most political offenders that were sent to Echigo either filled the graves of the little cemetery beyond the execution ground or lost themselves in some simple home among the peasants. Our literature holds many a pathetic tale of some rich and titled youth, who, disguised as a pilgrim, wanders through the villages of Echigo, searching for his lost father.

The religious reformers fared better; for they generally spent their lives in working quietly and inoffensively among the people. Some founders of new Buddhist sects exiled for a lifetime, were men of great ability, and gradually their belief spread so widely that Echigo became known all over Japan as the stronghold of reformed Buddhism. From earliest childhood I was familiar with priest tales and was accustomed to seeing pictures of images cut on the rocks or carved figures standing in caves on the mountain-­sides—­the work of the tireless hands of those ancient monks.

My home was in the old castle town of Nagaoka. Our household consisted of my father and mother, my honoured grandmother, my brother, my sister, and myself. Then there was Jiya, my father’s head servant, and my nurse, Ishi, besides Kin and Toshi. Several other old servants came and went on occasions. I had married sisters, all in distant homes except the eldest, who lived about half a day’s jinrikisha ride from Nagaoka. She came occasionally to visit us, and sometimes I went home with her to spend several days in her big thatched farmhouse, which had been, in ancient days, the fortress of three mountains. Samurai families often married into the farmer class, which was next in rank to the military, and much respected, for “one who owns rice villages holds the life of the nation in his hand.”

We lived just on the edge of the town in a huge, rambling house that had been added to from time to time ever since I could remember. As a result, the heavy thatched roof sagged at the gable joinings, the plaster walls had numerous jogs and patches, and the many rooms of various sizes were connected by narrow, crooked halls that twisted about in a most unexpected manner. Surrounding the house, but some distance away, was a high wall of broken boulders, topped with a low, solid fence of wood. The roof of the gateway had tipped-­up corners, and patches of moss on the brown thatch. It was supported by immense posts between which swung wooden gates with ornamental iron hinges that reached halfway across the heavy boards. On each side there extended, for a short distance, a plaster wall pierced by a long, narrow window with wooden bars. The gates were always open during the day, but if at night there came knocking and the call “Tano-­mo-­o! Tano-­mo-­o!” (I ask to enter!) even in the well-­known voice of a neighbour, Jiya was so loyal to old-time habit that he invariably ran to peep through one of these windows before opening the gate to the guest.

From the gateway to the house was a walk of large, uneven stones, in the wide cracks of which grew the first foreign flowers that I ever saw—­short-­stemmed, round-­headed little things that Jiya called “giant’s buttons.” Someone had given him the seed; and as he considered no foreign flower worthy of the dignity of a place in our garden, he cunningly planted them where they would be trod upon by our disrespectful feet. But they were hardy plants and grew as luxuriantly as moss.

That our home was such a makeshift was the result of one of the tragedies of the Restoration. Echigo Province was one of those that had believed in the dual government. To our people, the Mikado was too sacred to be in touch with war, or even annoying civil matters, and so they fought to uphold the shogun power to which, for generations, their ancestors had been loyal. At that time my father was karo, or first counsellor of the daimiate of Nagaoka, a position which he had held since the age of seven, when the sudden death of my grandfather had left it vacant. Because of certain unusual circumstances, my father was the only executive in power, and thus it was that during the wars of the Restoration he had the responsibility and the duties of the office of daimio.

At the bitterest moment that Nagaoka ever knew, Echigo found herself on the defeated side. When my mother learned that her husband’s cause was lost and he taken prisoner, she sent her household to a place of safety, and then, to prevent the mansion from falling into the hands of the enemy, she with her own hands set fire to it and from the mountain-­side watched it burn to the ground.

After the stormy days of war were past and Father finally was free from the governorship which he had been directed to retain until the central government became stabilized, he gathered together the remains of his family estate, and after sharing with his now “fish-­on-­land” retainers, he built this temporary home on the site of his former mansion. Then he planted a mulberry grove on a few acres of land near by and prided himself on having levelled his rank to the class of farmer. Men of samurai rank knew nothing about business. It had always been considered a disgrace for them to handle money; so the management of all business affairs was left to faithful but wholly inexperienced Jiya, while Father devoted his life to reading, to memories, and to introducing unwelcome ideas of progressive reform to his less advanced neighbours.

My father, however, held on to one extravagance. The formal once-­in-­two-­years journey to the capital, which, before the Restoration, the law required of men of his position, was now changed to an informal annual trip which he laughingly called the “window toward growing days.” The name was most appropriate; for this yearly visit of my father gave his whole family a distant view of progressing Japan. Besides the wonderful word pictures, he also brought us gifts of strange, unknown things—­trinkets for the servants, toys for the children, useful house articles for Mother, and often rare imported things for the much-­honoured grandmother.

ETSU INAGAKI SUGIMOTO was a Japanese American author born in Nagaoka in 1872 as the daughter of a high-ranking advisor to a powerful territorial lord, a few years after the Meiji Restoration ended Japan's feudal system. She was originally destined to be a priestess, but her father died when she was twelve and in 1898 she left Japan and became engaged to his friend Matsunosuke Sugimoto, a merchant living in Cincinnati, Ohio, whom she had never met. Together they had two daughters. Later she lived in New York City, where she turned to literature and taught Japanese language, culture, and history at Columbia University and wrote for newspapers and magazines. She died in 1950. 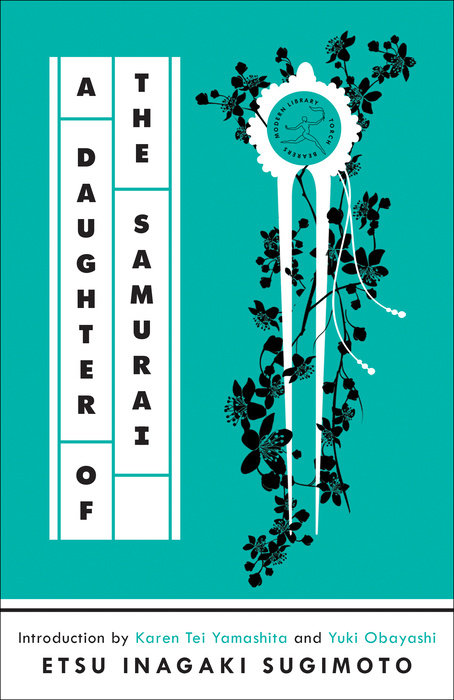